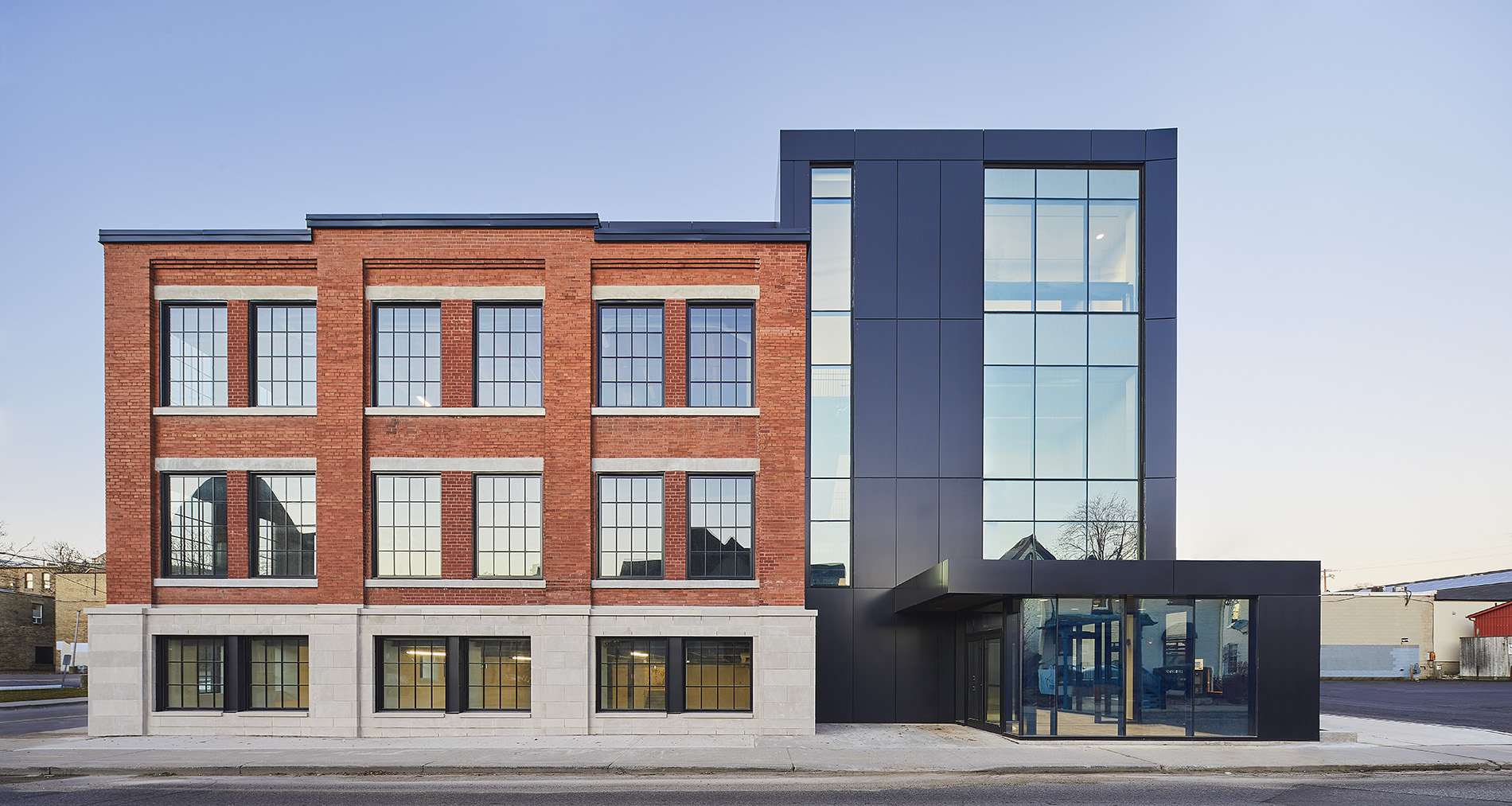 Local architecture is undergoing a transformation in Uptown Waterloo as older industrial buildings are transformed and adapted to provide contemporary work and living spaces. 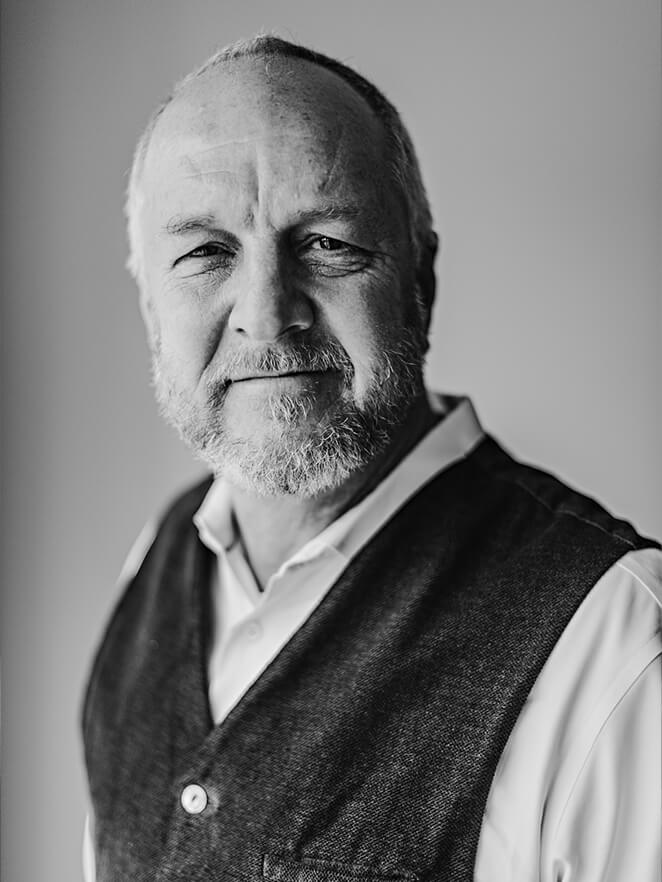 by
Patrick Simmons
on

Uptown Waterloo is undergoing a tremendous surge of redevelopment, spurred by an energetic tech sector, a brand new rapid transit line, and the popularity of a central location for new condos. correspondingly, the local architecture is undergoing a transformation as older industrial buildings are transformed and adapted to provide contemporary work and living spaces.

MartinSimmons Architects, through its designs for the Breithaupt Block, which houses Google’s Offices as well as several prominent condo projects in the city core, has played a key role in this fresh adaptive reuse. A prime example of this marriage of old and new is found at 19 Regina St in Uptown Waterloo. Once a glove factory in a modest red brick three-storey building, 19 Regina is now a contemporary office boasting an attractive extension and fourth floor boardroom and terrace.

Lexington Park Real Estate Capital took on the redevelopment of this centrally located, but dated building, MartinSimmons Architects on board to reimagine the space as an office that would attract a long-term tenant and top employer. From the beginning, the team was committed to honouring the history of the original building, but enhancing its existing features for a new purpose and improving accessibility.

This project wasn’t just a repurposing of an older building. The structure and aesthetic of the original building were truly returned to their former quality. The red brick facade and detailing was restored, windows previously bricked in were re-opened, and additional windows were added in a harmonious, seamless fashion. Inside, any structural changes (and there were many to bring the crumbling brick and beam structure up to code) were carefully designed to appear identical to the original. This sensitive design meant historic details were left in place, where possible. Even a charred wood ceiling in a second floor boardroom was left as are minder of a fire that swept through the back of the building many decades before.

An incongruous 1950s addition was demolished and a new addition was added - an impressive, four-storey black structure with supersized windows. The addition houses a new entrance stairwell and elevator.

‍“MartinSimmons and Lexington Park share a philosophy of wanting to preserve the history of a particular site while at the same time demonstrating new possibilities for the future. I believe that when people see the thoughtful design and care that went into the build, they will appreciate the common vision Lexington Park and MartinSimmons have for Uptown Waterloo.”

In a clever expansion of useable interior space, the previously low ceilinged basement was dug out to create a surprisingly bright and pleasant space with magnificent at-grade windows. However, the most impressive new space is found on the top floor. The elevator opens to reveal a dramatic granite accent wall and three walls comprising floor-to-ceiling glazing which boast one of the better views of downtown Waterloo. The boardroom opens onto an equally inspiring outdoor terrace. Complete with plantings, a bbq, wet bar, seating, a shading canopy, and wood privacy screens.

‍“We took the original manufacturing building and restored it to its original glory, but improved it with the knowledge, technology, and expectations we have now. Anything we added to the building through the extension is very contemporary and of our time, but understated so the new and old aren’t competing. The result is a really cool office space in one of the best locations in the city.” 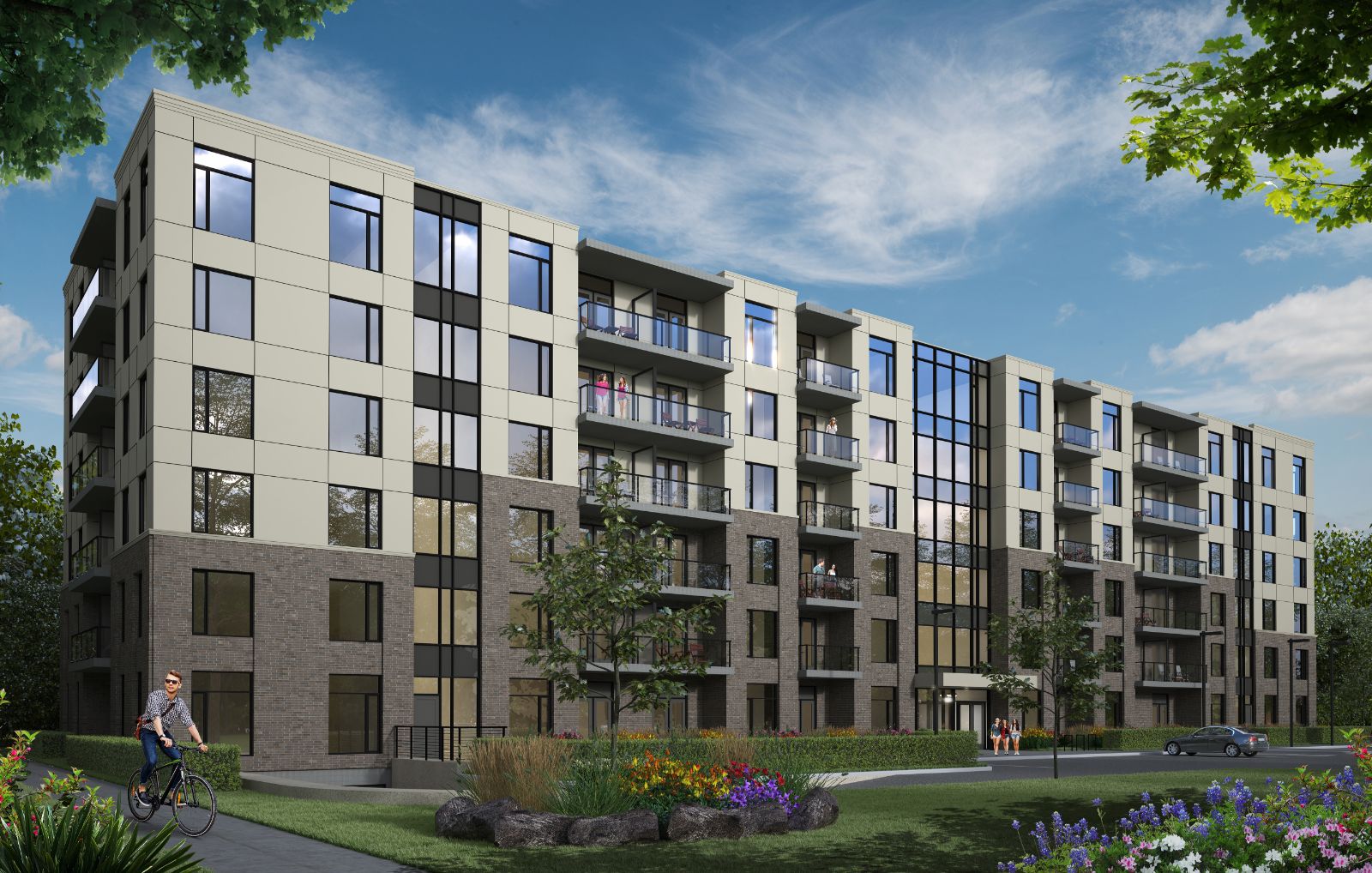 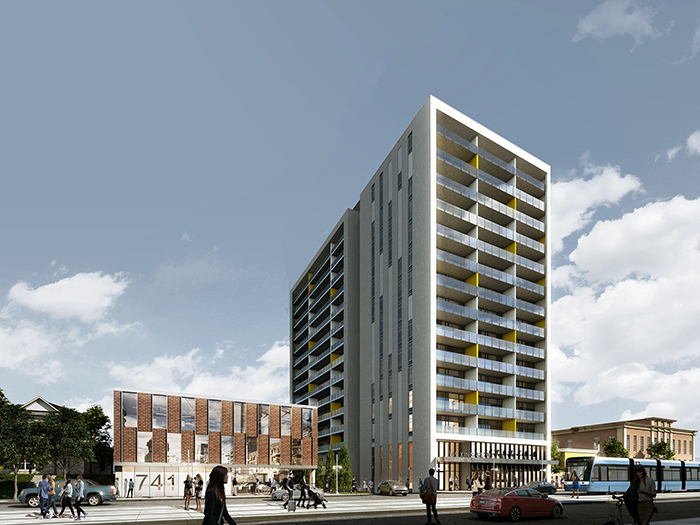 The Bright Building
Architecture
By
Patrick Simmons
BACK TO BLOG